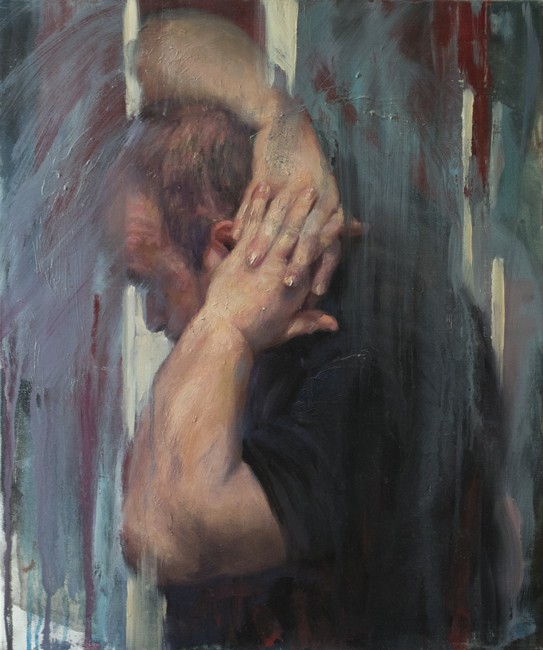 torso of a strongly built young man in a T-shirt with hands clasped behind head and neck
Alejandro DeCinti, Contraluz, 2008, Oil and alkyd on canvas, 55 x 46 cm

“I sit in the library,” a patient once said of his long days, “and try to force a daydream.” About his own illness, he said, “it’s like a patch over one eye. Or like being in a submarine: you can’t see what’s above the water if you don’t lift the parasite. But of course,” he added, “it’s also a free sky.”
He was speaking English, but also another language, not just the language of schizophrenia, in which he is fluent: It was more like the language of haiku.

We should learn it. Words, condensed and brilliantly chosen, could clarify a lot of common obscurities. In its guidelines, the Haiku Society of America describes the poetic qualities of wabi sabi: wabi, “unpretentious suchness of the ordinary,” and sabi, “a sense of hopeful sadness or recognition that nothing lasts, nothing is perfect, nothing is finished.” Oh no, you think, another fancy existential round-you-go. But the point is not to speak existentially. It is to speak essentially.

We use words constantly, frantically, hopefully, desperately, and yet, generically, without taking the time to notice what we are saying. Would the world change if we each spoke a variant of haiku? If not (and we might argue here), would it at least change if we listened?

Putting things idiosyncratically—outside of their pro forma descriptions, the kind you can hear while doing other things—is poetry, prayer, pillow talk. Or it’s standard fare. For instance, apparently the Zulu translation for the English phrase “far away” is, “Where one cries, Mother, I am lost.” It strikes the heart down to hear. Then there is a Fuegian seven-syllable word that in English translates to: “they look at each other, each waiting for the other to offer to do that which both desire but neither wishes to do.” This is the opposite of being struck dumb. This is being struck into understanding.

Words used this way tell us what we know but hadn’t known we knew. They give the truth a shape you feel compelled to share. You want to turn to the stranger next to you and marvel: “Mother, I am lost.” It wouldn’t be so bad to speak outside the vernacular in order to share more truth.

The other day I saw my schizophrenic poet again. I was wobbling on high heels, looking most unlike the person he usually meets. He had a hard time recognizing me. It was an experimental identity: I didn’t really recognize myself.

He looked down and, being a polite man, tried to refrain from judgement. But he couldn’t help his commentary. “Kung fu?” he asked at last.

Good Lord, I thought, nearly stumbling from comprehension. Could he have said it any better?

Elissa Ely ’87, is a psychiatrist at the Massa­chusetts Mental Health Center.

Magnify and Simplify was last modified: abril 27th, 2017 by decinti